“Unafraid of melody” and “astonishingly beautiful.” 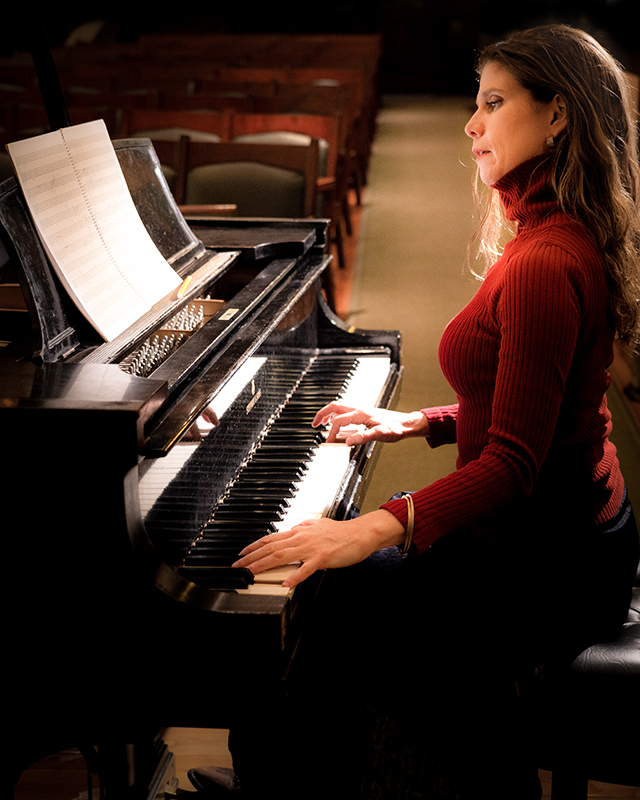 Amanda Harberg is a composer whose work has been described by the New York Times as “a sultry excursion into lyricism.” Her writing for a wide range of instruments weaves classical Western tradition with contemporary influences to create a distinctively personal style which “conveys a thoroughly original sense of happiness in music,” according to Cleveland Classical. “She invigorates the brain and touches the soul,” says composer John Corigliano. “I love her work.”

Her work has been conducted by Yannick Nézet-Séguin, JoAnn Falletta, David Alan Miller and David Lockington, among others. She has been commissioned by the Philadelphia Orchestra Association, the New World Symphony, the Grand Rapids Symphony, the Juilliard School, the Albany Symphony’s Dogs of Desire, the New Jersey Youth Symphony, the Dorian Wind Quintet, the Bay Atlantic Symphony, the Harmonium Choral Society, and the Network for New Music. She has also received many consortium commissions for new recital works.

Harberg’s recently completed Piccolo Concerto will be premiered by the Philadelphia Orchestra, renowned piccoloist Erica Peel, and conducted by Maestro Yannick Nézet-Séguin on the Fall 2021 Digital Stage series. Her Concerto for Viola and Orchestra, and her Elegy for Viola and Strings, were each performed by violist Brett Deubner and orchestras worldwide, and can be heard on Naxos American Classics with the Southern Arizona Symphony Orchestra.

Her work has also been presented at leading institutions including Carnegie Hall, Lincoln Center, Verizon Hall, the Philadelphia Chamber Music Society, and Bargemusic. Her recent works for flute and piccolo have won numerous awards and Harberg “has become something of a hero to the flute and piccolo community along the way,” notes the website of the Chicago Symphony Orchestra.

Harberg has received a Fulbright Hays fellowship, the Juilliard School’s Peter Mennin prize, two New Jersey State Council on the Arts Fellowships, a New York State Council on the Arts Fellowship, and a MacDowell Colony summer residency. Her chamber music has also won four Newly Published Music Awards from the National Flute Association. Her music is published by Theodore Presser Company and her work has been recorded on many labels including Naxos American Classics and Koch International.

Dr. Harberg is a dedicated educator with more than two decades of experience teaching composition, piano, music theory, aural skills, and 20th/21st century music history. She is in her sixth year of teaching composition at Rutgers University Mason Gross School of the Arts, and in the summers she is on the composition faculty at the Interlochen Arts Camp. Harberg began teaching through the Morse Fellowship program, which sends Juilliard students into New York City public schools. She also served on the faculty of the Juilliard School’s Music Advancement Program, which is dedicated to educating students from diverse and underrepresented backgrounds. Harberg has also taught composition at the the Luzerne Music Center, the Rocky Ridge Music Center, and the ASTA Chamber Music Institute. Harberg is a frequent guest at schools and universities where she particularly enjoys speaking to students about how to live an artistically vital and authentic life in today’s society.

Dr. Harberg completed her undergraduate and masters degrees at the Juilliard School and earned her PhD from Rutgers University School of Graduate Studies. She received a Fulbright/Hays fellowship to study for a year with composer/pianist Frederic Rzewski. Currently living with her family in Glen Ridge, New Jersey, Harberg is on the faculty at Rutgers University Mason Gross School of the Arts and the Interlochen Arts Camp.